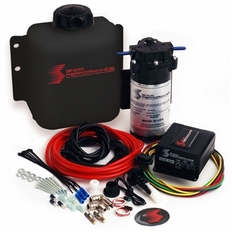 This kit uses manifold boost pressure to determine when and how much fluid to inject. Proportionally injecting according to boost pressure gives the most accurate delivery of water-methanol and allows the most cooling and performance improvement over the widest range. More power and driveability is the result. This kit can be used on any forced induction engine. The most suitable are the centrifugal supercharged and turbocharged engines, as they build boost is a more progressive manner concerning water-methanol injection. Start and full points are adjustable for engagement and delivery curve to match what the engine requires.

• 300+ PSI High Volume Pump
• 3 Quart Reservoir w/ Level Indicator/Switch
• Digital Variable Controller
• 2 Nozzles To Cover a Wide Range of Horsepower
• All Required Hardware Needed For Installation
• Comprehensive Instructions
Installation Instructions can be downloaded by clicking HERE
1. What are the benefits of Water/Methanol injection? Boost Cooler Benefits (Gasoline):
1. Low cost - where else can you get up to 60HP for as low as $275?
2. More power than other means of detonation control.
3. Efficiency - leaner air fuel ratio can be utilized for normal operation.
4. Greatly increases air charge densities for huge horsepower increases.
5.Allows you the ability to greatly increase boost on turbos and superchargers (if you have one).
6. Increases the effective octane of your fuel as high as 115 octane. Its like running race gas!